5 Reasons Why Your Daughters Should Be Allowed to Belly Dance

Most parents of young girls and teens who come to the studio have heard at least one of the following statements from family or peers:

“You allow your daughter do THAT?”

“Why would you allow her do something so sexy, so young?”

“I would never allow MY daughter do something like that!”

To these responses, I always shrug and reply, “Yes. Unfortunately, you’re going to get that.”

Most folks have no idea what Belly Dancing is. They imagine MTV music videos of scantily clad women in two-piece costumes twerking in hookah bars, because this is the only image of “belly dancers” to which they have been exposed.

The reality is, people don’t get exposed to  haflas (parties), studio dance performances, internationally travelling shows, or the culture of so many women who enjoy this dance at home with friends and family – places where this dance does flourish in all its intent and beauty.  Nor are most people aware that Belly Dance is one of the oldest social dances among women, performed by thousands of young girls, all over the world, often right by the sides of their mothers, grandmothers, and aunts. In some countries, there are Belly Dance schools, similar to those dedicated to ballet and other dance forms. Belly Dance is a healthy activity promoting positive self-esteem and comradery among girls.

Unlike other dance styles and activities, Belly Dancing is non-competitive. There’s no end goal; there’s no graduation, only personal growth.  You do it to learn how to move your body in a way that makes you feel good, and do so while spending time and laughing with others. Today, almost all activities for school age girls are competitive – sports, theatre, even math teams. There is very little out there for girls to do that is just for them, just for fun, self-directed, with maybe a soft goal of performing if they wish. And even then, performing is an optional goal!

Girls are constantly fed media and marketing telling them how they should look.   There are hundreds of studies on the impact of Photoshopped media and self-esteem. I have had girls in class as young as six say negative things about the way they look. It’s so disheartening. Building a positive self-worth starts early and impacts a girl’s success for the rest of her life!

3. They learn to own and control their own bodies

There comes a special power when a person can control their body – in what they wear, who they allow near it, and how they feel. When you can control the smallest movement, a turn of the wrist, a movement of the hip, there’s this sense of accomplishment and empowerment that comes with it. Even with full grown women, the fact that they learn to control muscles and movements to own as their own is a spark of freedom!

4.It makes them less susceptible to negative self-talk and external pressues

Girls who start Belly Dancing, have a higher self-worth, have more of a self-purpose or are more motivated towards their own personal goals. They know their body is a powerful tool, and they learn that although they may not be able to do a particular movement yet, they know they will be able to.  They seem to respond better when bullied or harassed in school. An example was when one young lady came in saying that someone had said her hips were too big, of which she replied, “why thank-you!” and walked away dancing. I think it also helps being part of a community of women in various stages of the natural aging process instead of just hanging out with their age clichés and the issues they have at that specific age.

5. Learning to spend time on themselves is a healthy habit to start early

Ok, this one may be more for the parents. women feel guilty taking time away from their families. Leaving one night a week is hard. Leaving for a one hour class to recharge makes them feel guilty. This is not healthy for moms, it doesn’t build independence for the rest of the family, and no one has recharge time alone! Mom not taking time for herself sets the tone for the next generation of women. Sometimes women come to the studio and the first thing they do is take a deep breath. When they come, they’re drained. When they leave, they’re smiling. Regardless if it is Belly Dancing, Yoga, or sitting and reading a book, find something for you for an hour a week!

This may be a good place to introduce yourself and your site or include some credits. 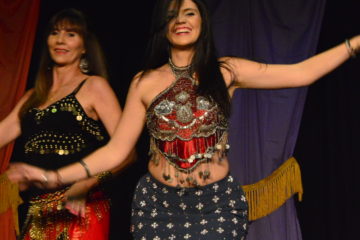 Here are my 4 “Favorite Things” about Mom and daughter Belly Dancing No matter what the ages are/ 1. Bonding: They’re only young once!   Every year I hear the voices of Mommies whisper “I’m just Read more… 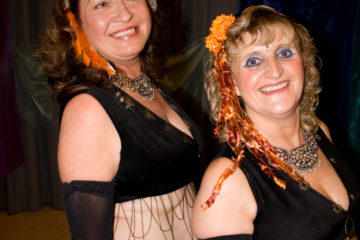 Belly Dancing and the Older Women